The day would have been perfect if Weeza's car hadn't broken down.  It all worked out all right - she's vastly appreciative of the RAC breakdown man who came out on Easter Sunday and took it to the garage, and of Ro and his friend who, having just arrived here from Norwich, turned round and went back again to fetch her and Zerlina.

I knew nothing of this until I arrived home from church.  Phil had cycled over so wasn't involved it the kerfuffle.  It didn't actually delay lunch at all, as I'd planned it for 1.30 and they all were aiming to arrive early, so we carried on with the birthday celebrations as soon as everyone turned up.

I forgot to take a picture of the birthday fairy cakes, but they had either chocolate or strawberry icing (some of each, that is, it's not that I've forgotten) and the candles were in the shape of letters, so spelled out "birthday" and the last one said "girl". 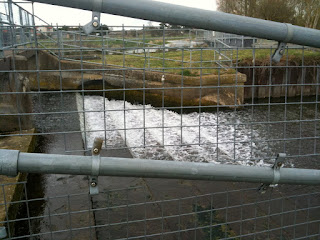 Afterwards, most of us went on a health-giving walk over the Three Bridges and across the marsh as far as the weir.  Here is a picture of the weir.  There are pictures of the weirdos, but I suspect permission would not be given to publish them, so sorry.

I checked my diary and I don't need my car for the next few days - actually, as long as I can borrow someone else's in the family on Thursday evening, I don't need it for ten days - so I've lent it to Weeza and Phil.  He had to leave his bike behind, but if he wants it they can always come over and he can cycle back again.  He's got this week off, so he doesn't need it to get to the station.

Hope you're having a lovely Easter, darlings.
Posted by Z at 6:56 pm

The Spring is winning over Winter at last, Mago. Still a bit chilly out there though.

Happy Easter to you and all of yours.

I was going to say what mago said.

Spring, the sweet spring, is the year's pleasant king;
Then blooms each thing, then maids dance in a ring,
Cold doth not sting, the pretty birds do sing:
Cuckoo, jug-jug, pu-we, to-witta-woo

I can recite The Walrus and the Carpenter pretty well all through. And I'm fairly good on the 17 times table. Oh, and a Shakespeare sonnet, can't remember the number, but it starts Those lips.

That's it. My repertoire.

Off to read a whodunnit now, which Mr Amazon fortuitously delivered on Saturday.

This one, which I had to learn at school, seems more apt for the weather here in Norfolk at present:

When icicles hang by the wall,
And Dick the shepherd blows his nail,
And Tom bears logs into the hall,
And milk comes frozen home in pail,
When blood is nipp’d and ways be foul,
Then nightly sings the staring owl,
Tu-whit; Tu-who, a merry note,
While greasy Joan doth keel the pot.

When all aloud the wind doth blow,
And coughing drowns the parson’s saw,
And birds sit brooding in the snow,
And Marion’s nose looks red and raw,
When roasted crabs his in the bowl,
Then nightly sings the staring owl,
Tu-whit; Tu-who, a merry note,
While greasy Joan doth keel the pot.

Hiss, not his, of course.

The Sage has just gone to the farm for milk. I'll look in the pail to see if it's frozen.

Was your saw drowned yesterday, Dave? Our parson's saw was a bit downbeat and the prayers, delivered by someone else, were positively gloomy. I didn't quite feel that the right note was hit for Easter Sunday.

No, I had a lovely jolly service, with cheery hymns, and they laughed serveral times during my sermon.

Don't you feel there's a certain vernally elegiac quality to the 17x table? As though this was going to be the very last spring?

You overwhelm me with poetic erudition, Christopher. I just like prime numbers and 17 is the most pleasing to multiply, it being more interesting than the surprisingly dull 19, although I have a fondness for 13, which frolics like a puppy.

Sorry Dave, I was so struck by the thought of future eternal winter that I didn't see you.

Two hymns I didn't know and one I hate, here. And a well-constructed sermon, but it was anything but cheering.

Christopher, what a pleasure that you mention Thomas Weirdoe, a less known master of the late Elizabethan age, I guess. Didn't he die on a travel to Prague to see Emperor Rudolf, I guess Borges mentioned it somewhere. He, Weirdoe, really deserves a biographer.

Dad was in the USO in WWII and taught me a number of silly poems and jokes. He loved reciting Abdul Abulbul Emir.
Are fairy cakes like what we call cupcakes?

The sky is blue
The grass is riz
Wonder where the litle birdies iz?

Actually, little spurts of hail this afternoon and snow yesterday.

Chat among yourselves, darlings.

Fairy cakes were made by and for children, but now they've got grander and bigger and more elaborately iced, they are often called cupcakes here too.

Sunshine now, and a fine day forecast - now that the holiday is over.