If you want to read about the operation, it's in the post below. If not, there's nothing to worry you here. Well, a flash of thigh.

I've had such a busy day that I've not written the post I had in mind. But I've remembered that I took pictures of my hospital room - what was I thinking about? - so you might as well see them. 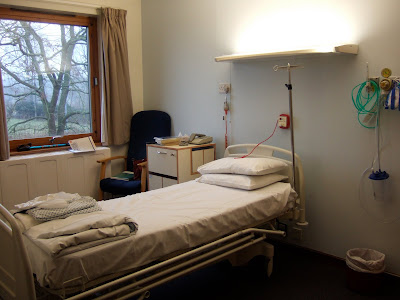 The Sage was deeply unimpressed by this bland watercolour I didn't bother with the television, preferring to listen to my iPod 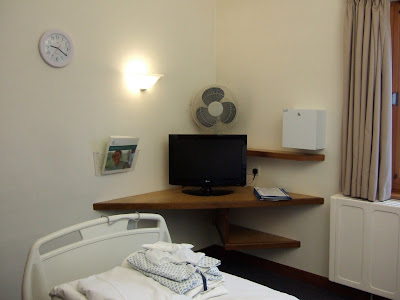 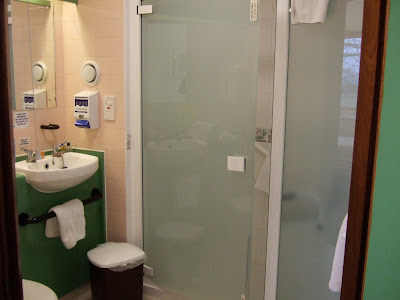 One of the views from my window 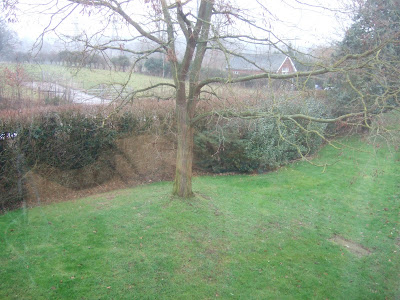 Later, there were sheep in this field 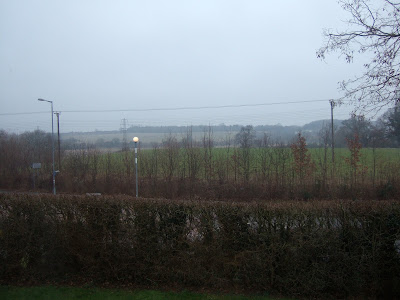 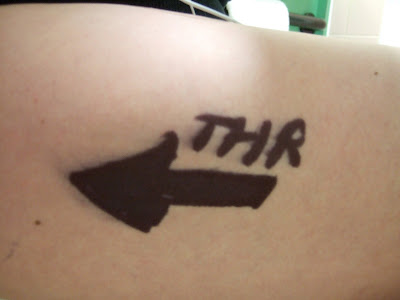 Mm, nice. The right one was taken off before or during the operation and he said it was up to me whether I kept the other one on or not at home, so I took it off as soon as he left the room on Monday evening. Or rather, Weeza did. I couldn't reach. 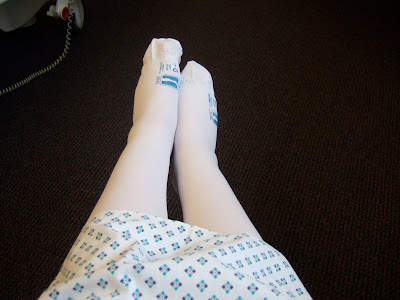 It's so ungory that I've done an 'after' shot too, trimmed for modesty

Today has been rather special - I received my first proper smacky kiss from Zerlina. Mostly, she lunges at you with open mouth or gives a cheek to be kissed. She has been giving proper kisses to the dog for some time, but I know my place in the pecking order so haven't been offended. This was quite out of the blue and very lovely.
Posted by Z at 10:36 pm

u did have a nice room Z, and i read the entire long post abt ur surgery.. just wanted to let you know.. am so glad it all went well, nd u r a brave one!

Good morning. I will not read the bloody report. It is consoling in a way that they have a plan and marker it onto the patients before they start to operate.

I suppose if one is forced to lie in bed for days, staring at it, a wildly extreme painting might become annoying.

If I'd been afraid but still done it, it would have been brave, but I genuinely wasn't. But thanks, darling.

I think it's much more of a girl thing, Mago. All the comments there are from women, so far.

I think that one would have annoyed the Sage, Dave.

I've gone for the short cheery post because I haven't yet recovered from ZIggI's operation post.
Sx

For a hospital room it was quite nice; lovely view. Green always cheers me up. I read the surgical post too - you may be right about the girl thing!

Ziggi's op was a different thing entirely, wasn't it, SB? Quite horrifying. Mine was nothing like so dramatic. However, I've written it down in full because I know I'll forget otherwise (one thinks one won't forget details, but several were already going and I remembered them the more I wrote) and I don't want to.

Anonymous said...
This comment has been removed by a blog administrator.
12:52 pm

Wow - you had a nice room with your own bathroom.
That would have made such a difference to my stay as I hated doing the walk of shame down the ward to the loo. I felt like doing a Queen Mother style wave.

Incidentally. Nice room but the TV is way away!!! When I had my accidental heart attack I go one that moved over the bed on an arm and gave me internet connection too!!!

Mind you..Carol works there so I may have got preferential treatment...quite right too...;-)

I do agree, Kaz. It makes all the difference. Also, not having other people's visitors and their children. And the quiet, when there's carpet on the floor, even in the corridor. If I'd used the NHS, I'd have had the same quality of medical treatment and the same surgeon, but a less tranquil experience, I'm sure.

Indeed, 4D. I have no wish for any of you to be led astray by anyone but me, however, so I have deleted it.

I'm not at all surprised that you got preferential treatment. For your pretend heart attack that worried us all so much.

It's a very nice thigh, true. You may kiss it better, but don't leave marks on the computer screen.

I am amazed to see that I have those same socks!