I remember the day particularly; I had an appointment at the doctor for my six-week check-up and El had to be fed and changed first, but then the photographer arrived. He was a friend of my parents and had known my father since childhood, and their parents were friends too. Now, his son and wife are good friends of ours and their children went to school with El and Al and are still friends in their turn - in fact, Susie has already visited El and little z.

His name (the photographer's), rather splendidly, was Wallingford; known as Ford, and his studio was just on the North side of the bridge in the centre of Lowestoft, if any of you ever visited the town in the past. One of his sisters was called Waveney, after the river.

Anyway, El was a bit fractious because she was hungry, but she stayed cheerful for long enough for the photos to be taken. 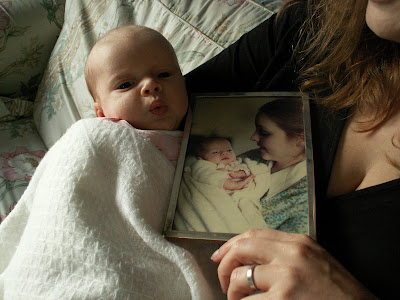 This is such a wonderful picture!! I wish we cld also get El and you as you look now.. that would have made it perfect!!

Oh, and may i remind u abt that red saree pic.. i was kind of waiting for that too :-)

PS: Little Z and Little El are both very very sweet looking children! And u look a very doting mother in that pic.

Blimey, it's babies everywhere you look (your blog, Phil's, Patroclus). What on earth was going on 9 months ago?

I haven't worn a saree yet, HDWK. Pictures were taken at the wedding, but I haven't seen them yet (that was the blue one, not the red). Dilly and I said we're going to have a girly Indian day, and dress the children up too, but it hasn't happened yet!

Dave, I think we know exactly what was going on 9 months ago.

What a lovely idea!

I think they look rather alike, although z's face is a slightly different shape from El's.

But you haven't changed at all, as I should have said earlier.

They have the same aura - and the same rosebud mouth.

Funny you should say that, Pat, in the week we took to decide on El's name, we called her 'Rosebud'.

She is beautiful. God bless her:)

Hello, Inexplicably, welcome and thank you.

Barry, I didn't welcome you properly. I felt I already knew you via Simon, but it was remiss of me. Welcome, and no surreptitious glance at my cleavage, please.

What a great photo idea! How cute is zerlina, puckering up that way! And Z, how glowing you look as a new mama!

And such a child! Except for all that eye shadow of course.