Now I'll go back a bit - we had Simon, Bess and Huckleberry and then Bess died so tragically, and then we were asked by the RSPCA to take in Paddy, a black Labrador cross - I can't quite remember her background, but her owners needed a new home for her.  Paddy was a novelty to me: a well trained and obedient dog.  I remember telling her to come and go and sit and stand and wait - poor dog, she must have been puzzled but I had never known a dog do what was wanted, at my command, before.

We didn't have poor Paddy long, because she developed a large lump sticking out of her bottom and the vet thought it was a cyst.  It wasn't.  She went to have it removed, the vet found that she had a lot more tumours and phoned to suggest simply deepening her sleep.  She was a lovely dog, it was a sad end to a short but happy (except for my ordering her about) life.

The most memorable thing about Paddy was her swimming prowess.  She loved to swim.  She liked chasing ducks.  She would go down to the quay at the bottom of the garden and launch herself into the water after a duck that was peacefully swimming past.  It would head out to the middle of Oulton Broad and Paddy would follow it.  She swam faster than ducks and, by the time the middle of the Broad was reached, she would almost have it within her grasp - whereupon the duck would fly away and Paddy would turn and swim back.  In the summer there were a lot of boats on the river and we would hear cries of amazement as people noticed a dog swimming 50 yards or more offshore.

I don't think I have a photo of Paddy, but here is the one of Simon, Bess, Huck, Kipper and Jess, who was one of the five black pups of Bess's litter.  Someone asked if the rest of them were like the blond brothers except for colour.  Well, they were. Another pup went to someone else in the fishing business and he was called Bloater (yes, I know!  Not my name of choice).  I don't know what the other three were called or who took them.  Jess is lying down at the front.  I know I've posted the picture of me, holding Bess, before. 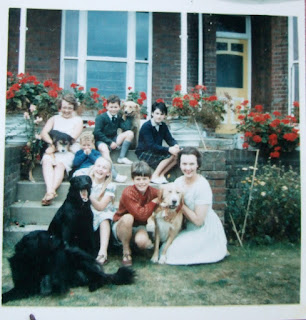 Three dogs.. brilliant. If I ever get round to getting another dog, it'll be one of a pair.
A pair of border collies.. This is Plan A

Yes of course I remember the photos with the lovely dogs. We had a female beagle and now have a female America cocker. The both seemed to dislike swimming. It must be fun to watch her chasing after ducks.

I've noticed a few bloaters on that East Coast in the Summer Months.

Did Simon sit upstairs on the bus?

I thought cocker spaniels were water dogs, Haricot. Mind you, my mother's last greyhound disliked running so it just shows you shouldn't assume anything!

Especially on a Friday night after a few beers and a kebab, Rog.

Yes, he did. He was quite the dog about town. Of course, it was in the days of the open backed double-decker, the Routemaster type, with a conductor. The maroon and cream ones were made at Eastern Coachworks in Lowestoft.