A miss isn't necessarily quite as good as a mile

I mentioned, briefly, back on 11th September, that Wink had had a very near miss on the motorway while driving to visit us.  I took a photo of her car the next day, but never got round to posting it here.  However, reading Christopher's account of the horrible skid they had on a busy, icy road (black ice, Blue Witch, he wasn't driving too fast for the conditions as far as he knew) reminded me.

Just to recap - Wink was driving along the M11 when she glanced in her rear-view mirror and saw a car overtaking another and going out of control.  She braked, not knowing what was likely to happen.  The car shot alongside her, hit the central crash barrier and shot across her bows almost at right angles to her car.  On the hard shoulder, it righted itself again and was brought to a stop some way along.

Piecing it together afterwards, it appeared that the driver of the car being overtaken had been intending to pull out himself.  He looked in his mirror, it seemed okay, so he signalled and started to move, looked again, and a car was coming along very fast in the overtaking lane.  He stayed where he was, but the woman driving the overtaking car may have thought he was pulling out, swerved,  and was going so fast that she couldn't control the car.

This, they discussed while waiting for the police to arrive.  They couldn't ask the woman, who was sitting in her driving seat and didn't get out.

Wink was surprisingly matter-of-fact about the whole thing.  It hadn't happened, it nearly had but it didn't.  So no need to get worked up.  We offered to come and fetch her, of course the motorway was closed but we could have met at the next service area and I bring her car back while the Sage drove Wink.  But she decided against it.  She did stop and have lunch, but then carried on.

Once she was here, she realised she'd lost her mobile.  She'd had it at the service area, but not used it since. We tried ringing it, but no reply.  However, not long afterwards, I had a phone call.  Wink had stopped in the next town to here, to buy me a pot plant.  The phone had dropped out of her pocket into a flower pot and another woman had just found it.  Since she didn't want to wait, she said she'd leave it at the supermarket.  She phoned me because she checked the last caller.

So, two non-events, in one sense.  But it was a near miss.  Check out the picture. 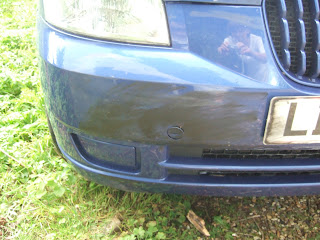 The car was that close.  Wink braked just enough.
Posted by Z at 6:12 pm

I still won't use the junction where the motor bike hit me last year, whenever I visit you.

I should be driving to Northampton on Sunday, but have already said that I'm not going if it invlves a risk of life or limb.

It's the corner by the church here that's bad now, I'm nervous of walking there. Not just in case I fall over, but in case a car skids into me.

Holy shit! Close call. One sensible and skilled woman driver braked excellently to let another, crap woman driver, to skid on by.


Glad it turned out safely, in the end x

Horrifying. Clearly she's made of stern stuff, but I wonder if she had any reaction later, the next day or subsequently?

Wink was lucky, wasn't she? I know that road well - I'm always amazed it doens't happen more often. So many people think they are invincible. Speeding is easy money - speed isn't the main problem, and it's time the roads were policed to wipe out/fine people eating, smoking, text messaging and using a phone in teir hand while driving. Coming back from Wisley the other week (90 miles round the M11/M25/A120) I counted 13 people doing those things.

I maintain my earlier today stated position on accidents on the snowy/icy roads at present...

No-one who's had an accident ever says/believes/thinks they're at fault. Even if they admit responsibility at the time, it's amazing how they change their story when they get home and think about just how much it will cost them if they are honest with their insurers. Which is why I always carry a camera, and know how to record on my phone. Mind you, with so many insurers just going halves with the other party these days, without investigating at all, I know that it won't necessarily help if the worst comes to the worst.

And even if you are not at fault, and you don't lose your no claims bonus, your insurance premium still goes up the next year more than it otherwise would. NCB is only a percentage off a calcuated premium. The premium is calcualted according to the risk you present to the underwriters. Just being involved in an accident increases your assumed risk, hence the premium.

yikes! that was more than close, sugar! glad she's ok. i worry about my krewe out in los angeles because they're always driving. *sigh* xoxxo

Bloody lucky. She didn't react to it at all, but she had had something else unpleasant happen a couple of days earlier that she had told me about but wasn't intending to tell anyone else - well, she did tell the family and cried about it. As far as the near miss was concerned, she said she's had a lot more real problems in her life and wasn't going to fuss about something that hadn't actually happened.

I've skidded on ice before, though not for years, fortunately, one sometimes just doesn't realise how easy it is to lose control. And the thing with black ice, you don't even know it's there.

The Sage and I were talking about your spin, Chris, and he admitted once doing a 180º spin in his Lotus once, on a roundabout. So, in my turn, I told him about the time I skidded across the road, fortunately into the path of a Landrover because it was able to stop. Though, come to think of it, I was driving a Morris Minor, so I must have been married then, so I'd have told him at the time. Still, it was a shared moment.

I know, Sav, I worried about my son-in-law cycling down a steepish hill at 6 o'clock every morning in the dark in winter - maybe worrying gives a certain protection? And his new job doesn't take him down that hill. Still cycling in the ice, though.

Close. Good to learn that nothing worse happened.


And a nice self-portrait.

I hope you raised a glass to her Guardian Angel. She earned her keep that day.

The photo is Zerlina, not an artificially youthened me.

Wink's guardian angel wasn't up to much at one time, but has improved over time. Certainly came up with the goods that time.

I did not mean your avatar-image, I mean your reflection in the car. It is you, isn't it?

Hah - of course, Mago, I'd forgotten about that. Having taken the picture, I'd meant to blur that out before posting it, but that was three months ago. It was indeed me bending down squinting at the car.

Z's self-portrait is not scary. It's delightful! As is Z.