Second coming, as it were

As usual, the internets is awful.  It's taken me a good ten minutes to fetch up a picture in an auction that the Sage wanted to see - very nice, but we won't be bidding as a friend wants it.  Well, probably not anyway, even if he didn't.  Not without seeing it, and it isn't local.

It was such a warm afternoon that I took the papers out to read on the lawn. Lying on a blanket, I shared the space with the bantams, of course 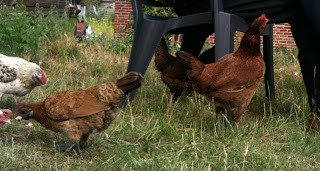 and so have a bird's eye view of them clustering round, hoping for a little something.  They received it of course, but not from me.  I didn't want to encourage them to join me on my blanket.

Ro phoned and mentioned that he and Dora have both bought new phones.  Ro recently negotiated a salary upgrade so felt he could justify a smartphone and Dora was thinking along the same lines - they have both bought the same one.  I asked if he remembers Howard and Hilda ... it wasn't meant to be a dig, and he didn't take it as such.

Anyway, I must take the Sage along and buy him his birthday present, which is only a month late.  We really need to do it in the next ten days, because then, as I've mentioned, we're off to visit Wink.

I've just read that link and it isn't the best explanation - the point is that Howard and Hilda were really happy together and they always dressed the same.  So we (the family, that is) use Howard and Hilda as a verbal shorthand for couples who are happy to be like each other.

I'm also reminded that I think that Peter Egan (who played neither Howard nor Hilda) is delightful.
Posted by Z at 9:33 pm

If I had access to the internet I could look up Peter Egan.

I used to be Peter Egan's double.

Now I've turned into Howard. Plus I turn the phone round to untangle the curly cable. Well, I would do if we didn't all use mobiles.

I was wondering only the other day which unsung hero/heroine did all the H and H knitting, and was he/she ever mentioned in the credits?

...or (the thought occurs to me) could it have been I,LTV?

He's a good natured man, Dave, I'm sure he'd sit down so that you don't have to look up.

An affable, charming and super confident chap, his character in that, according to IMDB. Sounds about right, Rog.

I looked up IMDB to see if the knitter received a mention, but sadly not. I loved that programme, the humour was nicely understated, though in fact it was almost not funny at all.

Ooh, maybe it was. She still isn't given a mention on IMDB.

Isn't it lovely how chickens gather round hopefully whenever you appear.
I'm very much a beginner but I love watching my little brood and it's amazing how they'll appear from nowhere as I approach.