Isn't it odd, the way that memory works, or sometimes doesn't work?  My contact lens is supposed to be changed monthly - that is, I take it out every night and put it in again in the morning, but it's meant to be thrown away and replaced once a month.  I'm not sure why this arbitrary timespan was chosen, probably because it's easy to remember but, over the years, this has stretched somewhat as, once in a while, an accident can befall a nearly-new one and it can become a bit expensive.

I had a new pack of six lenses which I'd carefully put in the work box.  I was sure of it. I also had one other, having ordered a new box when I first used the last-but-one.  All this tedious detail is just to explain why it happened quite some time ago and why I had time to doubt my memory.

When I went off to Scotland a couple of months ago, I wanted to take a new lens.  I went confidently to the work box, which is a mahogany Victorian one, with a lift-up lid and two false and one real drawer opening in the front.  I keep important papers, such as birth certificates in it, and needles and thread in the drawer, and my printer is on top of it.  So, I lifted the lid and discovered that the blue and white box of my memory was actually a box that held an elasticated knee bandage that I tried using as a support when my leg hurt a lot - it didn't help, so I soon stopped.  So, I searched other places, to no avail, and have done so a few times since - I knew it would be in here or the dining room and that it was certainly not upstairs, but I just couldn't find the box.

Today, I suddenly thought that perhaps it was in the work box after all, underneath the other knee-bandage box.  So I shifted the printer, lifted the lid, searched, didn't find it - and remembered that it was in the drawer instead.  But I couldn't remember until then, I needed a trigger.  It's like having to go back to where you had a thought to be able to remember what that thought was.

Anyway, now I can wear a new lens tomorrow.  I think it's high time, after three months.  Doesn't seem to have done any harm though.

Anyway, I have pictures for you, of Al's honey.  As you see, he has the pictures marked - he found that people were pinching his photos for beekeeping information websites, which was a bit naughty.  He thought he'd got them so they couldn't be taken, until I did.  Heh.  So the reason for the 'watermark'. 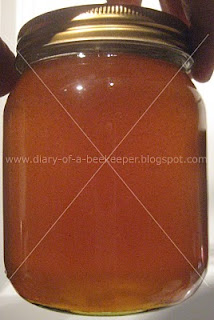 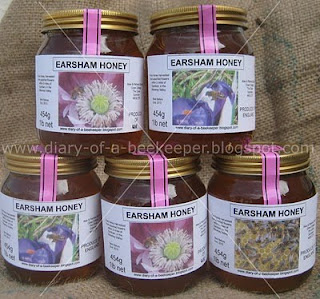 He took the photos for the labels - you have to be careful when putting up flower photos not to make them too clearly identifiable, because if there's a clear picture of lavender, for example, the honey must be mostly lavender honey.  However, we rather like the variation of labels - if he ordered them, the minimum quantity is several years-worth at the rate he's likely to produce it, so he doesn't want to be stuck with one sort.

Seeing is Bee Leaving. Something along those lines anyway....

Is it Arthur Askey who's singing in my brain?... bees in a beehive must behive....

I had the same problem with honey and other bee-related pics being nicked. There are still 3 of mine on sites that have refused to remove them when I've requested.

Home-made labels are much better than commercial.

I can't see the print terribly clearly - but I *think* that one of them (at least) only says "Produce of England", whereas it must legally say "Produce of UK". Stupid, I know, but, that's the EU for you.

Being a confirmed "England"er rather than a"UK"er, I printed a whole load with "England" rather than "UK" when the regulation first came out, and I was made to add "UK" to them. Grrrrr.

Al gave me the name of the download to mark the website on pictures, I'll look it out and put it up. It would scupper those cheats.

I haven't looked at the label, I don't think I'll mention it to Al. When he's officially told, I'm sure he'll change it. He's only got 13 jars left, he decided that the bees need the rest of this year's honey themselves. They're starting to get a bit bad-tempered now there are fewer flowers about, apparently.