Z goes back to bed

Excellent to see so many friends today, really lovely. It was a meeting of the society I used to chair, so everyone knows me and it's all very enjoyable. Afterwards, I did a very small amount of shopping - half a pound of tea from a most excellent shop, Wilkinson's, which is the only place in Norwich I know that I can buy Rose Pouchong, as well as various interesting other teas and coffees. They have a huge choice and lovely staff.

After that, a brief errand for the Sage and I walked down to the cathedral, where he was picking me up, and we came home. This afternoon, however, I was exhausted. I went to bed for a nap and slept for two hours. Actually, I then had supper in bed and have only just got up in time to get undressed and go right back there. I know I'm going to sleep badly tonight though as a consequence.

I'm sure it's anaemia, exacerbated by the anticoagulants - I feel full of energy until I actually do anything much. This morning, I stood chatting for about half an hour - not in one place, I was moving around to see different people - but by the end, I was glad to sit down. Then I sat for an hour, then walked half a mile, tops. It really isn't much to lay me low so thoroughly. But when my HB level was down around 9, many years ago, I was given iron injections, though I felt much worse then and at least now I don't feel in the least low or depressed (I don't know what it is now, but it dropped from 12.8 to 9.2 following the operation). I've been guiltily admitting laziness, but maybe I'm just not quite up to more than I'm doing. Well, not much more, anyway ;-) At least I cooked the Sage's lunch - it was only scrambled eggs, but a gesture, anyway.

I want to make marmalade next week, while Al still has Seville oranges. We're on our last pot from two years ago - I made enough then to not have to bother last winter. I've always done it by squeezing the oranges, slicing the raw peel etc, but I'm wondering whether to have a go at cooking the oranges whole and then cutting them up afterwards. It seems as though it would be quicker and less effort, but a great deal messier because of fishing out all the pips from the sticky fruit. Anyone got a view on the subject? I've tried using the food processor to slice the peel but I haven't found it entirely satisfactory, and I don't want to chop it as I like shreds of peel and clear, not cloudy, marmalade. 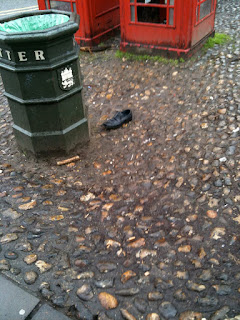 Random shoe in Tombland (this is the road outside the cathedral, there are no visible tombs)
Posted by Z at 10:27 pm

"Cloudy" marmelade? What does this expression mean? Somewhere here I should have "The Book of Marmalade", but I could not find it now ...
There must be some well-tasting fruit that comes with a lot of iron.
An interesting picture you have put at the end of the post. Are these telephon-booths out of use? These pebbles or cobbles (is there a difference, in German it is "Kieselstein" which covers a wide variety of stones) come from the local river? Where's the second (right) shoe? Is the piece of wood in any way relating to the shoe?

If the peel is minced or chopped in a food processor, the marmalade will be opaque like jam, which is what I meant by cloudy, with little bits of peel in, rather than completely clear jelly with shreds of peel suspended in it. It tastes the same but the appearance and texture are different and not as good, I think.

The next road to that one has a lot of night clubs and a reputation for rowdy and drunken behaviour. Maybe that's how the shoe was lost. The phone boxes are still in use, though some of the windows are broken and they could do with a scrub. Don't know about the wood, it was just there.

They are cobbles because they are fixed in the ground - if they lay loose they would be pebbles or stones. There are a lot of natural flintstones in Norfolk and they were used in road and house building.

I keep thinking I've recovered completely from last year's illness - I'm now waking before 7 again (and getting up) and mentally feel full of beans (at least in the mornings - things go downhill by the evening).

It's when I start doing things that I discover my stamina levels aren't what they used to be.

I'm working to build them up by the time the weather is suitable for bricklaying, as (I am sure) are you.

You are wandering around Norwich already?!!
I've only had 3 days sickness and it's taking me ages to get back to normal - you've had major surgery!

Thank you, lovely Dave and Rog, for being so encouraging. I haven't been ill of course, just had a piece of leg cut off. I'm not completely surprised in one sense - I said to the surgeon "I suppose those pills will make me tired for a month" and he assured me they wouldn't - it's just that I feel so well until I overdo it by the least thing.

Hi, Jen darling. I haven't seen an update from you recently, I will call in to see how you are.

Great progress, despite the fatigue. V. pleased for you.

I think that shoe escaped through the broken kiosk window.

Anonymous said...
This comment has been removed by a blog administrator.
9:41 am

Thank you for the explanations! The German Postal Services used to have yellow telephon boxes, and pretty many of them, but they are gone nowadays. If you find a public telephone it is hanging on a kind of metal pole, even these covering plastic wrap thingies are not used anymore, no telephonbooks. Official explanation is that people today have cellphones.

You must try to 'make haste slowly' but it sounds as though you are doing really well.
Yes, I remember Wilkinson's - lovely shop. They supplied a selection of tea when my friend opened a stall on the market here and even printed her business name on the labels for her.

A lot of the old red phone boxes have been removed - some people have bought them to put in their gardens. When I was in France a couple of years back, one town in the Loire Valley had an English red phone box in the square - it is twinned with an English town, which presented it.

I got up late this morning too, Sandy. Now I know I have to pace myself, I feel a lot less guilty about seeming to be lazy. The Sage is wonderful, of course. I can't get over how kindly he's looking after me.

I go to Wilkinson's every time I'm in Norwich now - don't think I'll ever work my way through all their teas.

I read the other week that 80% of people who buy marmalade are over the age of 45. It made me sad. I hope it isn't going the way of Battenburg, Lemon Curd and tongue sandwiches. Marmalade deserves better than that.

wow! i'm impressed by all you are doing, sugar! quite inspirational and really just what i needed to read today. thank you for the proverbial kick in the butt! xoxoxo

I am not in the least surprised to read you are feeling a lack of energy, what with all the energy you expound on a daily basis running around here and there, babysitting, gardening, church work, looking after Sage, etc...You are a veritable hive of activity! Slow down... :)

*rushes out to get the ingredients to make a Battenburg, Lemon Curd and tongue sandwich*

*thinks better of it*

I'd like to know who the "brief errand for the Sage" is with whom you walked down to the cathedral? (Ha, spotted something Dave missed! ;))

Do you have a pressure cooker? If so, marmalade is so quick and easy it's unbelievable. I'll await your response before posting the recipe as it would be a waste if you don't...

One of the instances where a comma before 'and' is correct. As is Dand's comment. Not that it counts in a comment, anyway.

I have to say, I was never fond of Battenburg cake, as I only like marzipan if it's made without almond essence. However, it certainly shouldn't vanish. And when was the last time anyone saw seedy cake?

Savannah, WG, I'm learning the lesson to just go with what my body tells me. it's not so hard, actually - I'm naturally lazy, so usually have to take on obligations or else I'd lounge around all day.

Dave, none of your filthy talk about tongue sandwiches. This is a blog for pure-minded people.

I haven't used my pressure cooker for years, BW, not quite sure where it is, in fact. It'll be the two-hour simmer for me.

And it seems that it is always just one shoe.

Lots of iron in raisins.