I spent much of my time in the next few weeks in preparation for our wedding party - sending invitations, booking this and that, choosing stuff - but the pressure was off, as far as I was concerned. Funnily enough, I didn't mind the thought of being the centre of attention at the party, it was the actual wedding ceremony that had seemed so off-putting.

I can't remember many specifics about the next three months - I know we had a trip up to Derbyshire to the Sage's school Gaudy, where former classmates were surprised to find this fairly confirmed bachelor with a very young wife in tow. He was quite roundly teased and I fielded that for him - for someone as shy as I was, I had pretty good social skills, I suppose because in a fairly impersonal social setting one can put on a façade and not have to reveal much of oneself. We stayed, on the way home, in a converted watermill. The next morning at breakfast, I heard an American woman say to her husband, "this is the best cup of coffee since we arrived in England." Since the coffee was of indifferent quality - as was most coffee in this country at that time - I felt for her, and also warmed to her good nature in putting the best spin on things.

We didn't have a wedding present list, something that was just becoming popular then. Sensible though they are, I don't really care for them. Pa and Ma bought us a china dinner service - after many years' use as 'best', it's now used all the time. My mother bought us Victorian silver flatware (cutlery, darlings), at an auction that the Sage was conducting. He became quite squeaky as the price rose. Again, that service used to be hauled out for best, but we now use it every day.

We never bothered to put the photos from the party in an album, though our parents did, so they're around somewhere. They were taken by a friend from childhood of my father's, who was a professional photographer. My father had been best man at his wedding. I have got one photo to show you, however, which my sister-in-law gave us on our 25th anniversary, in a silver frame. It's come out a bit fuzzy, but then so am I after all these years.

In order, Pa, Ma, the Sage, Z, Mummy, Wink. Only the other day, someone saw the picture and said "is that your two sisters with you?" She'd have been pleased to hear that! She was, in fact, 49 at the time. And the hair colour is natural. 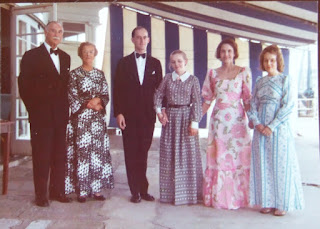 As for pyjamas, which was asked about a few days ago - on discovering that everyone was going to be in DJs or long dresses, my sister-in-law, who didn't have a long dress, went shopping. She is a frugal shopper and was reluctant to spend much on a frock she didn't think she was likely to wear again. So she bought a pretty nightdress with long sleeves and a high neck and came to the party in that.
Posted by Z at 1:40 pm

Why, the Sage hasn't changed at all!

A handsome chap in't he? Puts in me in mind of one of the royals from years back. (One of the better looking ones I hasten to add)

Who's the pretty little thing holding his hand again then?...;-)

Z ! how old were you? you look about 10...not meaning to sound rude, but you do..
Lovely dresses, especially Ma's

I think you look like a young teenager as well.

And in the photo.

Why are you standing next to Ian Fleming?

It was a couple of weeks before my 20th birthday. Yes, I look like a child. A newly pregnant one, actually, though that didn't show yet.

Oh crumbs, we were all so much younger, and now our parents are long dead. I've come over all emotional.

Thanks, Rog. you always say the right thing. X.

You the Sage and Wink look quite pleased, your in-laws, not so much. Also, I think the Sage looks very young, and you very shy. Being older than my husband, I don't set much store by age differences. You do look to be about 14 though;-0

Was Pa ex military? He stands like a retired officer. I love your dress, very stylish. Sage does look rather royal-but very happy as does his bride.

I was going to say you look about 10, waitting for the next post

you look absolutely delightful and obviously not as innocent as you look! And whilst it is true you look about 13, Sage doesn't look that much older!

absolutely gorgeous! and that's not just the dresses. . .

this has brought a happy smile to my face - thanks, Z

Pa was in the army in the First World War. He was in Africa though, not Europe.

Indeed, Sarah, a bit more of an age gap than I'd be quite happy with. When Al was 19, I was 41. I think a woman of 43 wanting to date someone that young is in denial about her age. He'll grow out of her, though.

Interesting that you're holding hands and your hands on top - as if you've suddenly grasped theirs for support/courage/something...

You look lovely and so happy. Sage looks like all of his Christmases have come at once.

Just the way it should be.

I was rather clutching his hand, it's true. Can't tell if I was holding my mother's or if she tucked her hand into mine. It certainly shows how I didn't like having my picture taken.

The Sage was pleased with himself - as well he might be!