For years, my mother and I took it in turns to cook Christmas dinner, until I took over the job every year when her health and nerves weren't really up to it any more. My in-laws always invited the Sage's sister and family for Christmas Day and we went there on Boxing Day. When it was my turn, I was very organised and made a time plan for the day. I decided when I needed everything ready by and worked out the timings accordingly. Christmas dinner was served on time, unless flexibility was planned in - if you're having roast beef, for example, you eat it when the Yorkshire pudding is cooked because it won't wait but, knowing it will take half an hour, you can adjust other things around it.

What we ate varied - sometimes I did cook turkey - free-range Norfolk Black was our choice, sometimes beef and sometimes goose. One year, my niece asked me to teach her how to bone a chicken. I had a hasty lesson from our butcher, showed her (that is, I boned half and let her do the other half) and then, that Christmas, I boned the turkey and stuffed it with a piece of gammon which I'd pre-cooked. I put other things in there too, can't remember what. I did that a second time before deciding that it was quite a lot of effort. Nice, tasted good, easy to carve but it looked like a well-browned thigh.

I became a bit ambitious over the years and incorporated various different starters which usually had to be prepared, or at any rate cooked, at the last minute. Blini were particularly popular, I remember and so were some little filo pastry things. I was always careful to put in time to leave the kitchen and come and spend time with the family. It was scheduled, but it was always there. Several times. Each time, the children opened a present or two and then we played or whatever for half an hour. This was what I'd have liked as a child, which I still remember as a time when I'd have liked my parents' time and didn't have it. At 12 or 12.30, by which time things should be well under control, I stopped for champagne and canapés (this was quire often the first course, which was easier and nicer eaten an hour or two earlier than the rest of the meal) and we opened the rest of the presents, or most of them. This caused some difficulty when my sister became a Catholic and went to Christmas Day mass, which went on forever and really screwed up my timings, because I always forgot. I'd already been to church (and played the organ - usually carol requests) for the C of E 20-minute service. Anglican clergy being married, they knew better than to expect women and children to drop everything for 2 hours, and that you'll feel a whole lot kinder disposed to Baby Jesus if you're not worrying about the roast drying out. Wink tends to slum it with us in the C of E nowadays when she's here on Christmas Day.

For years, I used to make Christmas puddings. I'd make three, we'd eat one that year, one the next and the last was two years old when it was served. My daughter was working in a hotel in Brussels one year and was the only English member of staff. No one could quite believe that the English kept their Christmas puddings for two years and still considered it fit to eat. Eventually, I bought a pudding at the local deli one year when I was busy and hadn't made one and, when everyone said how good it was, thought soddit and have never made one since. No one is that fond of pudding, so I often have something else as well. The year Delia's last Christmas book came out was brilliant - it had loads of stuff, such as cinnamon icecream, an orange trifle, chocolate torte, sticky toffee pudding - I worked through her puds for years and they were all Christmas gold.

My time plan is limited to noting how long the main dish takes to cook nowadays. But this year, I'm not cooking at all until Sunday. Dilly and Al have invited us for Christmas Day and Weeza and Phil for Boxing Day. Weather permitting, of course. 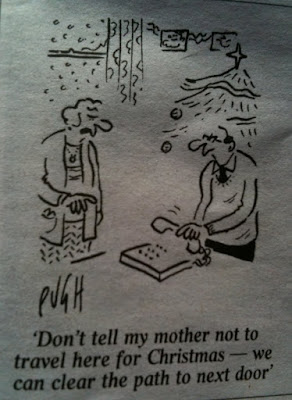 As you will imagine, I have a detailed chart drawn up for the Christmas dinner I'm cooking on Satuday.

Merry Christmas to you too, Cloudcutter.

I'd be a bit concerned if you didn't have, Dave. I trust you have set aside time for having a bit of a sit-down and for playing a few games of Scrabble with your son.

Merry Christmas dear Z to you and yours. Too much cooking in that post but I enjoyed it nevertheless! I have a good excuse to spare people my efforts this year and my girls are cooking - I wonder what I can do to get out of it next year...?

I've never cooked a proper Christmas dinner... thank goodness for M&S is all I can say...
HAPPY CHRISTMAS!!!!
Sx

I'd gone about as far as I could with reminiscing, food was about all that was left. Sorry, I know there was too much about eating and you'll all have indigestion.

D'you know, SB, if ever the Sage and I are on our own for Christmas, we won't either. In fact, I'd enjoy keeping it simple in that case.

Merry Christmas to you, and to anyone who isn't about tomorrow when I'll say it again.

this year we have 8 adults and one partially weaned baby at the table for Christmas Dinner so we are having Beef in Beer with mash as our oven is too small to successfully do a roast for those sort of numbers.

When I was a child we used to go to the 8 am mass on Christmas day. No singing and out in 40 mins possibly 30 depending on whether the heating was working adequately or not. If the Mass is taking up 2 hours of Christmas day then the priest is just being a sadist.