When my children were little it was still quite usual for mothers of little ones not to go out to work, not full-time at any rate, until the children started school. I was very hands-on with my children, and we did lots of crafts and cooking and playing together. We started preparing for Christmas in late November, by making the Advent calendars.

I've said before that I'm not in the least artistic, so we had to keep it simple in design, but they took quite a lot of time to do. We started by taking out the previous year's cards and cutting out small pictures, such as a bell, a snowman, a robin. Ideally, they wouldn't be much more than a centimetre square, but a few could be larger. Then, on a large sheet of paper, we'd draw and paint our picture. One year this was a Christmas tree, once it was a house, with Father Christmas coming out of the chimney, once it was a snowman, another time it was just Father Christmas and once he was on his sleigh. There must have been others, because I don't remember that we ever repeated ourselves and by the time Weeza and Al were growing out of doing it, Ro was growing in.

After that, we set out our little pictures on the big one and lightly drew around them, then I cut out a flap on three sides for each. Next, we stuck the big picture lightly onto another sheet of paper, carefully glued each small picture in place under the flap, then reglued the whole securely. Last thing was to draw on the numbers. It was fairly unsophisticated, but we enjoyed ourselves and were more than satisfied with the finished artwork.

Once December started, we decided on our tree decoration project. We made new decorations every year, not instead of the old ones but in addition. I can't remember all these - I know that one year we made Father Christmases with a cardboard tube for the body, a golf ball for the head (yeah, a ping pong ball would have been better) and a paper hat, another year we made snowmen, we did the usual angels out of doilies - home-made doilies of course, we made snowflakes. We had room for everything because we had a huge tree. We lived in a large Edwardian former Rectory for ten years and, as in the house I grew up in, there was a big hall with a stairwell suitable for a tree.

That reminds me, once, we were all in the study, having spent the afternoon doing the decorations, when we heard a falling sound. We had great difficulty getting out of the door - the tree hadn't been attached securely enough to the banisters and had fallen - must have been at least 15 foot tall and it followed us into the room.

While we were making our decorations, we sang Christmas carols. We had a Rupert Bear book - I don't know where it is unfortunately, although I have seen it in the last few years. I'll have to have a search. The story was that one of the character's granny (might have been Pong Ping's) was poorly and all the chums felt sorry for her and wanted to buy her a Christmas present. So they went carol singing round Nutwood to raise money, and everywhere they went they asked the person for their favourite carol, made them all into a book and then gave it to her with the present they'd bought, and she was feeling much better by then and everyone had a lovely Christmas. We had this book out every December for years, which is the reason I remember it so well. Apart from whose granny was involved.

By the time Ro was growing up, we did less of this sort of thing, although we still made an Advent calendar, but he and Al enjoyed making things out of card. Once, I bought a book full of decorations to cut out, fold and glue and we still have a few of those. I've hung this one on the tree this year. 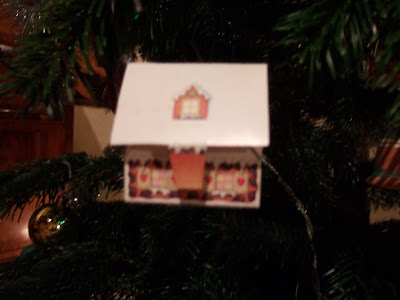 For a couple of years, my mother went to evening classes in stained glass work. They were in Norwich, so Weeza went with her the first year - she loved it and would like to take it up again. Al, who was then fourteen, went with her the second winter. He took to it too, and afterwards, when my mother equipped herself with the necessities for carrying on with it, he made decorations for the tree. 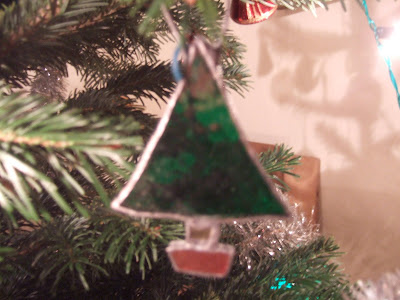 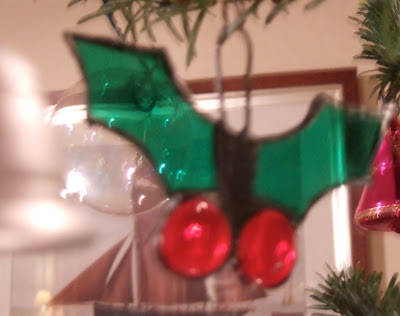 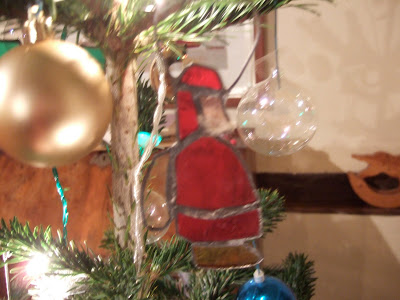 I also love these fragile clear glass baubles. I bought them, fifteen or more years ago, from a local shop for £1 each - most of them have been broken but I cherish the ones that are left, hanging them myself at the top of the tree. 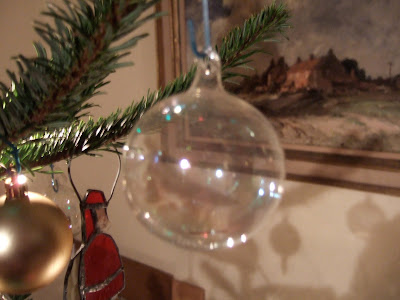 I bought this from the Christmas market in the Grande Place in Brussells. I also bought a glass treble clef which I loved, but I haven't been able to find it for the last few years. I'm afraid I may have not checked carefully enough when the tree was taken down, and it been left on. 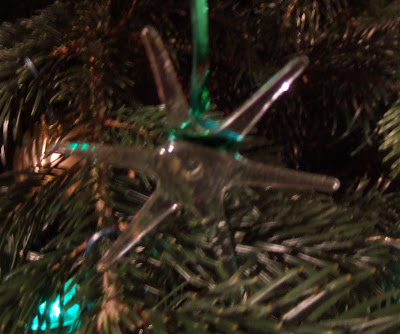 The fairy - or, as I call her, the floozie, is very old. She has adorned the Christmas tree every year of the Sage's life and earlier. I threaten to make her a new dress - the present one is not original - but I haven't quite got the heart. I do rather love her, homely as she is (such a kinder word than plug-ugly, don't you think?) and she's all the decoration that the Sage really thinks a tree needs. 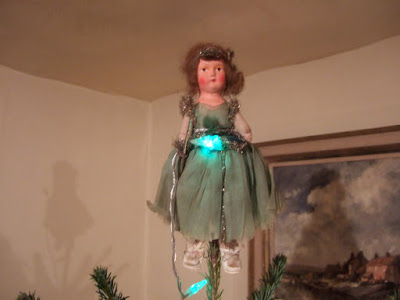 what a delightful story, sugar! happy christmas to all y'all! xooxox

I like the green bat. It appears to have enlarged testicles though.

Do your children remember all the crafty things you did with them when they were little?

Yes the fairy does look a little like 'nursey dumpling' but hey if the sage loves her..... and i do agree a tree needs little else!

*slaps Dave*
Our Christmas fairy was very similar to yours - my aunt made it... but she was blonde and had tinsel wings [the fairy, not my aunt]. I used to fight my sister to put it on top of the tree... but I never grew tall enough to win.
Sx

That's triggered a long lost memory. I used to make advent calendars with my grandparents, but I had completely forgotten about it.

Love the glass decorations - especially the stained glass ones.

Oh yes, I love your reminiscenses. (Is that how you spell it? I'm too lazy to look it up). We, too used to make decoraions but I'm nt sure they lasted from year to year.
Glass baubles are a no-no since the cats started climbing the tree though!

Love the floozie. I wonder if your children will follow your example with their children., It's always pleasing when they do.
Merry Christmas and a happy healthy 2100 to you and yours.

Ob such sweet memories! Now you can continue these traditions with the grandkids.
Who painted that beautiful painting to the right of the "floozy"? It looks beautiful.

Ah yes, Martina, you've a good eye. It's a Norfolk scene by http://en.wikipedia.org/wiki/Edward_Seago
And the Lowestoft fishing boat was painted by
http://www.lowestoftmaritimemuseum.org.uk/burwoodart1.htm

I asked Weeza today, BW - she doesn't remember the Rupert book (she will, if ever I find it) but she remembers the rest - I'm not sure if it's with as much feeling as I do though.

The grandchildren helped me decorate the tree yesterday.

Thanks, everyone - hope it reminded you all of a few happy times.

*gives Dave a hard stare instead of a kiss

I misread your title as 'oralation'....oops...soz

Z I LOVE love love this blog, thank you! I fully intend to now borrow (aka steal) the idea and do the same for the 2-Sox Tree.

And Dave. The green bat is the badge of my last squadron, IX(B) Squadron. But without the huge plums.

I look forward to reading it, darling.

I had no idea about the decoration. No idea at all.

I used to make advents like that with my son.


Have a very Merry Christmas and a happy new year

FI love your clear ball and the Sage's floozie. Merry Christmas to all. There is still twenty minutes left here.