Friday night and Saturday morning. And Saturday afternoon, up to about 3 o'clock

My son Ro doesn't quite know what to make of me any more. He thinks I am regressing somewhat and, indeed, he may be right.

An example follows, of course. Yesterday evening, we were talking about something internet-related and I said "Ooh, there's something I ought to tell you about." "Please don't," he said. "I've a feeling it'd only worry me.

You know," he continued, "Sometimes I think that you're here preparing me for being a parent."

This morning, back in the shop - well, what else is new? Today, Yagnub had an exciting Event. To tie up with the flower festival (I think, I don't always follow current affairs) in St Mary's the redundant church that seems to be used an awful lot for a redundant church, there was a Bridal theme day with a Big Parade. Shop windows were decorated to fit the theme! Not Al's - for one thing, the windows are already used fully to display his wares and there would be nowhere else to put them, and for another, few people think mainly of greengrocery when planning their wedding. Al did, of course, the reception marquee was decorated with baskets of vegetables rather than flowers, but I don't think this has created a fashion yet.

After the parade, the brides were going to the church to eat strawberries (yes, we provided them) and drink champagne. 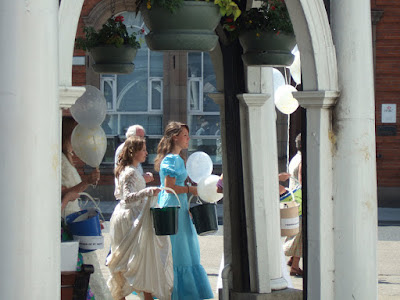 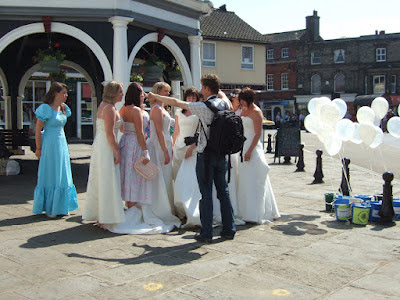 Collection buckets for St Mary's at the ready 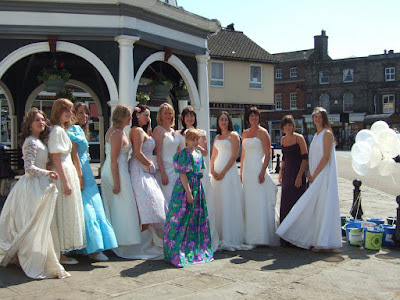 I know, a really awful photo. And yes, that is my reflection. But I'd like to make it clear that it's just the way my tshirt ruckled, that was NOT my fleshy midriff. No one would call me thin, but I do go in at the waist. 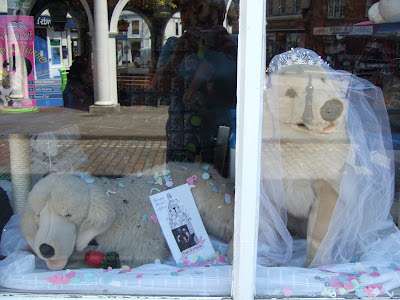 A worse photo. But I think it required a close-up. What was Val comparing Tony & Cherie to? 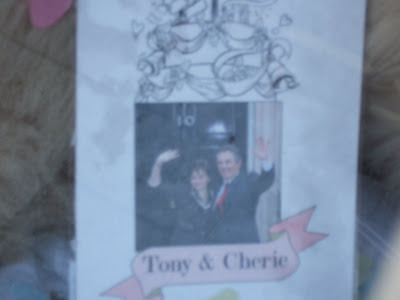 If you think those last two were bad, this was my first attempt. I'd forgotten that I'd used the camera to film the bluetit the other day and hadn't adjusted the setting.

In little over a week, Zed's photo, reflection and voice. I have not even a toe still in the closet.

At about 2 o'clock, the Sage came in to offer me a lift home. I explained that I was waiting to see the Big Parade (no trombones, I fear, let alone cornets) half an hour later. He asked if I'd had any lunch and I admitted that I hadn't - we're too busy even for a drink, most mornings. He offered to take me to the caff. Ooh, I brightened, but then customers came in and I was busy again.

A few minutes later, he came in clutching, in one hand, a plate containing a sizeable slice of beef pie with gravy and in the other, a pint of beer. My dears, if I had not been a married woman I would have Popped the Question there and then.

And then I arrived home to discover the Chap who Gardens Occasionally for us had weeded the gooseberry and asparagus beds and was hard at work weeding the spinach. I retired indoors (I'd have helped, but it was too hot in the sun for such a delicate bloom as I), well satisfied.
Posted by Z at 5:58 pm

That Sage is quite a guy...... does he give classes ?.
What a lovely selection of brides and buckets.
As to the picture of the witch and her kin.....
Least said the better......

It comes naturally to him, Martin. If he tried to analyse it, he might lose the knack.

I thought the doggy connection was rather entertaining.