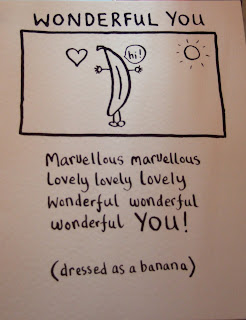 I was sitting here typing this afternoon and noticed a hen outside.  After a minute, I realised it was the new chicken - who's a jolly good layer, by the way, we've had at least half a dozen eggs from her since she arrived here on Christmas Eve.  I went out and gave her some corn - I hadn't given the chickens their lunch, so she was soon joined by others.  We've been keeping her separate from them, in case they go for her, until they all get used to each other.  Now we've got the bantam cocks too, we've put them all in a run with a dog kennel for shelter.

Then I went to feed the cocks, and found that one of them was out too.  I gave him some corn, then fed the other two - there was a loose bit of wire and a big enough hole for a small bantam to get through.  So I covered it and then went and picked up the hen and put her through the door and then fetched the cock and put him in too.  They're very tame, dear little birds.  I haven't taken any pictures yet, I'll do that soon and show you.

I was quite surprised when I saw them in fact, they're black and white and very small.  James has hand-reared them and they are quite tame.   Apparently they're pedigree bantams.  That'll raise the tone around here, then.

Clearly, the card says you have "a peel!"

My next door neighbour used to keep silkies.

Ooh, LX, you are smooth x

It was so unexpected, when I received it, Liz. Made me laugh!

I'm almost as besotted with chickens as the Sage is now, John.

Those chickens sound cute. Hope the others soon accept them.

Starting to sound like a Chicken Licken story. Got any geese?

I suspect that they will be thrilled to find three gentlemen vying for their affection, Ivy. And the other hen has been mothering them, they tuck under her wing at night, so they'll look out for her.

I'm afraid Foxy Loxy got the goose, AQ. Mind you, you're right, the sky did sound as if it was falling on our heads last night.

I gave that card to Barney a few years ago. I'm not sure he completely loved it but I do.

It's so quirky, I think it's brilliant.