The fishmonger calls on a Monday and I usually get fish for a couple of nights.  For today, I bought two trout.  I asked the Sage to pick up some vegetables to go with them when he was in Yagnub.  He came home looking happy.  The first asparagus of the season was in - we only ever buy English asparagus and it's only in season from the end of April or early May, depending on the weather, until the longest day, 21st June, when the growers stop cutting to let the crowns build up strength for the rest of the summer.  He had bought a bunch of ten spears.  He had also bought six Jersey Royal potatoes, again newly in season.  He said he wasn't going to tell me how much they had cost, but to relish every mouthful.

So, in keen and happy anticipation this evening, I put the fish in a roasting tin, each in its own square of greaseproof paper, with slices of lemon and a sprinkling of salt, a smear of butter and a shake of white wine, and wrapped them up to bake in their juices.  I trimmed the asparagus, frugally cooking the ends in with the potato water - soup will be made tomorrow from the ends and the cooking water - and scrubbed the potatoes.  I poured a glass of wine for myself while the meal was cooking, and remembered.

What I was remembering was an occasion, eight years ago and a few weeks after my mother had died.  One day, I bought a whole fish to bake, I can't remember what it was.  I picked broad beans and asparagus and dug new potatoes from the garden.  Two of the three were the first of the season, probably the beans and potatoes.  It was, to me, the perfect meal - not only because it would be simple, delicious and fresh but because the first of each seasonal vegetable is a celebration, and the lovely fish complemented them perfectly.  And, in the precise sense that I enjoyed it, my mother did too, we completely understood how each other felt, and no one else would in just that way.  And I felt such a pang of loss.  Today was the first time that I really felt that the Sage got it too. 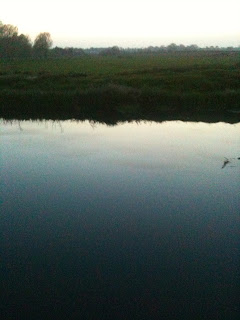 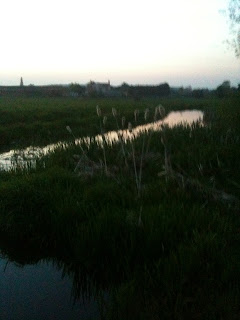 After dinner, he wanted to go for a walk to investigate the boathouse, so I went with him.  The boathouse has been neglected for at least forty years.  We did have a boat, a dinghy, but the hut was already tumbledown so we kept it on the river bank.  The Sage has had a wish to get the boathouse back into use for a long time, but it's going to be a big job, largely because it's so awkward to get at.  However, he feels that it would be possible now, with Jamie's help.  I've stipulated that there are several more important things here to do first.  However, I do agree, it would be great.  The river is quite silted up in places, so we'd need something flat-bottomed.  It's a really quiet, tranquil place and I would love to have a little boat.  I grew up by the river and like nothing better.  He stayed on the path while I (who was wearing wellies) trod down the nettles and scrambled up onto the river bank.  I found the boathouse, but it was too dark to take a picture by then.  However, I had taken a couple of snaps of the river a little earlier.  It was dusk, but you can see the tranquillity.
Posted by Z at 11:14 pm

Your river looks lovely. Did you picnic out there with your children? It's odd what triggers memories.

I totaaly agree with the first of any produce season. We had the first tiny radishes, as thinnings, last weekeend and tey were marvellous.

I've been eating Jersey Royals for a couple of weeks now. No doubt Tescos get first pick.

Lovely post, Z. Made me quite nostalgic for The Old Country. I shall go and read The Wind in the Willows this afternoon.

4D, lovely to hear from you. I suppose it's too far for you to come here on 2nd May? - though the self-employed ignore bank holidays anyway, I daresay you're booked up with lessons..

There are lots of waterways around here. This one is really quiet, a few canoes or rowing boats perhaps but no more. We used to go out regularly and just potter along for half a mile or so with our picnic.

I expect they do, Dave.

More Wind in the Willows than Swallows and Amazons. Simply messing about in boats.

Oooh. Just noticed the party invitation up there. What time is it?

About 12.30, Dave. I was going to put that in the emails, but of course people who already know where to come may not email.

Jolly good. Will this count as an RSVP? Or did you want them in writing, on gold-edged card, so you can make a scrapbook?

Dave darling, since you decline the role of co-host, you will be the guest of honour.

I don't really do scrapbooks.

Thanks for the kind invitation. Sorry I won't be able to attend, for I'm sure it will be a grand celebration.

If you came all the way from Nevada. we'd have red carpet right down the street. Another time xx

I very much like this pictures of the river. I grew up in a valley and played next to the river as small child. The river always was gentle to me, even when it came out of its bed - in fact it was a "she". Down the river lived the Noeck, who sometimes demanded a kind of sacrifice. I always enjoyed the transient areas, especially in spring, when deep blue areas could be found in the early gentle green of the meadows, sometimes a cloud would appear. I never was in a boat on the river, and I doubt that I would do it, I feel to much respect for this surface. To this day I enjoy to listen to water, sadly the most artificial installations "make" it to fast. oh dear.