Bobby was my mother's dog.  She had him before she was married.  She always said that she took to her marriage a dog and her grandmother's grand piano - which had a wooden frame, went out of tune constantly and eventually was broken up because she couldn't bear to get rid of it, nor to have my father  putting a load of papers and stuff on it for another minute.

In due course, Bobby was joined, at the hotel in Weymouth, by Shulie (I don't know how it was spelt) and Goggy (named because the small Wink couldn't say doggy).  Shulie was a bull terrier and all I know about her is an anecdote about the time my mother heard a tiny Z voice crying "Give it back! Give it back!" and went into the room to find me, aged two or three, trying to pull open her jaws and retrieve the biscuit she had stolen.  Ever greedy, you see, no wonder I struggle with my weight (lost all I put on in Corfu and another two pounds mind you, hah!).  Goggy was a smallish black mongrel terrier.  When my parents left Weymouth, they bought their much-loved and respected pastry-cook, Mr Dyke, a guesthouse in appreciation of his years of service, and gave him Goggy as well.  We always stayed there when we visited my grandfather.

So, we brought Bobby to Oulton Broad.  He was very old and feeble by that time.  He was a wire-haired fox terrier and had been a great rabbiter in his early days.  Sadly, he came a cropper through running about on the cliff-top chasing bunnies, because he twice had dreadful mishaps and lost the sight in both eyes.  One was scratched by brambles, I'm not sure about the other.  Did a rabbit fight back?  I can't remember what I was told - Wink, are you reading this?  My parents married in 1947 and he died in 1959, less than a year after we moved house - I think he was about 15 years old, maybe more. 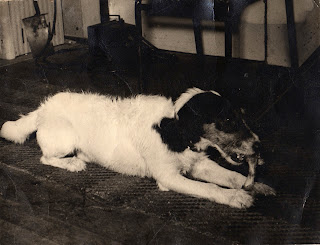 And here he is in his younger days.  He was very much my mother's dog, she adored him.  I don't remember him taking much notice of me.  When he died, we were due to go on holiday within weeks and my parents decided to get another dog on their return.  However, the silence was soon too much for them, they rang the RSPCA and they heard of a puppy whose elderly owners were struggling to cope and who wanted him rehomed.  Their name was Mr & Mrs Bagshaw and they lived at 19, Moyes Road.

I know, darlings, what a memory.  Ree-markable.

I was once told that the life of a man is the life of seven dogs. So I stopped at four. They were Peter, Penny, Humphrey and Windsor.

Well, they didn't necessarily run consecutively in my case.

Must not be correct, because I have 8th dog now.
5th and 6th ones were wire fox terriers. One ready to join Mensa, the other dim beyond belief. Bobby sounds like he was a great childhood pup.

Quite remarkable indeed!
There is something very consoling about having dogs to remember in your past - they seem to complete a picture.

What a sweet story!

I am not sure how I'm going to write all about the dogs I grew up with, because we had several dogs at a time - once I get into full reminiscence mode I don't know when to stop.

Funnily enough, I don't reminisce much in real life. If any of my children read this, much of it will be new to them.

I used to walk an elderly friends dog called Bill when I took mine out. My dog was called Ben!

Oh John, I still have to rescue them from the spam folder. I don't understand it, sorry.