Out of the pear tree

The Sage called to me to come quickly.  One of the hen partridges had come to show us her babies.  I'd thrown some crushed maize for the chickens and their chicks a little while ago and this mother and babies were tucking into the remains.  I took some photos but they're so well camouflaged that they are too hard to see.  Later however, Dilly called us out for the same reason, and this time I took more photos and - well, they're not that easy to spot, but at least it's possible. 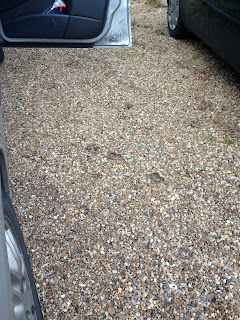 The mother had gone under the car.  Can you see the babies? 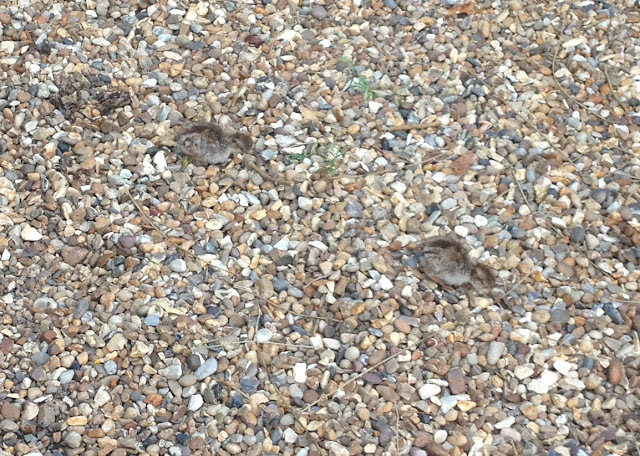 "I didn't think there could be anything cuter than a day-old chick," I said, 'but partridge chicks are the sweetest little things you could see."  Dilly agreed.  The mother wasn't a bit concerned about us being closer to her babies than she was, but a few minutes later one of them followed her and the other got lost.  It started to give piping little alarm calls and she whizzed back, calling out reassuringly, to fetch it. Reunited, the three of them went through a hole in the barn door to safety.

I have no idea how many chickens we have now, including the chicks of various ages, but it must be at least fifty, and the Sage says that there are more eggs due to hatch in a few days.  We hope for females of course, but there will be more than we can cope with - or rather, more eggs in a few months' time than we'll know what to do with - and we will have to find homes for some of them.  And then there are the partridges and pheasants, who cluster with the others to be fed.  And the Sage says there are kingfishers by the beck.
Posted by Z at 9:33 pm

I'd forgotten just how tiny partridge chicks are. Like all babies, I suppose.

Gosh, you're living in a sort of benign Hitchcock film!
Trust the car wasn't moving at the time.

How tickled the Safe must be!

I don't think I have ever seen a picture of a partridge chick before. All chicks are cute.

Lots of interesting things seem to happen at your house. No wonder you manage to blog so often!

Do they follow you around thinking you're their Mum..?

Bloody hell this is me Gleds

I wonder: do they follow you round thinking you're their Mum:?

Yes, one is never quite ready for the smallness of a newborn - or newhatched.

Dilly was about to go out, Tim, so we chivvied the family away.

He's been waving his tickling stick about, yes Rog.

Always something, Liz, and if there isn't I tell you anyway.

Gleds, sorry about that. Your comments got sent to spam - I allow anonymous comments so there's no reason for it, but I can't find a way of stopping it. I rescue them asap though. And fortunately they don't follow me around, but some of the chickens are quite attached to the Sage.

The camouflage is amazing - this is like one of those pictures that were popular a few years ago when you couldn't see the object of the picture without letting your eyes go out of focus.
But they are lovely once you've found them : )

Not easy, but finally saw the cuties.

They were pretty well invisible in the other pictures. Yesterday afternoon, mother brought them to the door to eat corn with the chickens!