Yesterday, I spent some time scything the wild flower patch near the side door.  It looked good until a week ago, but when the poppies and saxifrage finished flowering, suddenly it was a mess.  I scythed about a third of it, which wasn't all that much but it was hot work and the mother hen with three chicks kept wandering across, probably looking for seeds fallen from the newly-cut plants.  And then I *didn't get around to* (otherwise known as 'was too lazy to') clearing away the debris.  And then it rained heavily in the night and this morning, so it wasn't until about 5 o'clock when I finally got the barrow and tidied up.

At this point I must insert a warning for those of you who are inexplicably concerned at the sight of pictures of small creatures, because I saw a newt running out of the weeds and towards the house.  Newts, at this time of the year, do not live in water but move onto land.  Unlike frogs, they then have dry skins and they look like little lizards.  I am extremely fond of newts as we had them in the garden of the house where I grew up.  I took photos, which is what I'm warning you of.

The newt hid behind a plant pot by the house and I took its picture before clearing up the rest of the mess, but then it occurred to me that a chicken might kill it, so I went and picked it up and took it to the kitchen garden.  It was quite docile and didn't try to get away.

Later, Hannah, whose wedding reception is being held on our front field, came with the firework chap and her inlaws-to-be and her dad, to check on the layout of the arrangements.  So all is well there.  There's plenty of room - there may be anything up to 300 people coming, so we're really hoping for a fine day.

The Sage took the firework guy (not in a Guy Fawkes sense) and father-in-law across the field to say where he suggested everything went and the rest of us talked about the arrangements.  They wondered what the Sage was saying.  I quoted Mig's marvellous summing up of him "...on the ball. But only the ball he was playing" and Ian, Hannah's father and our former neighbour, who knows him very well, thought that was very astute.  And indeed, when Tim the firework guy came back, he sketched what had been suggested and we all agreed that would work splendidly.  "How will the marquee guy know where to erect it?" wondered Hannah.  But it's all right, that's the bit of the field that we'll mow. 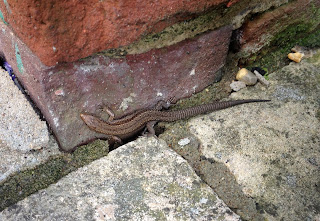 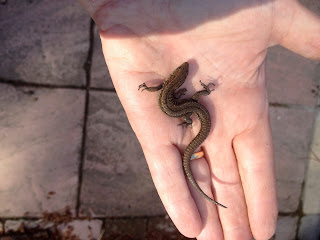 Oh whoops, the bit from where I copied'n'pasted onwards is small and black. Sorry.

As was said on Question Time last night, the most Rnglish thing is eccentricity. John Lydon was on - the Sex Pistol's Johnny Rotten. What a difference 35 years makes.

Well, there's a source for eye of newt if a recipe calls for it!

He's trying to say hello, that Newt. Trouble is the "Z" looks like an "S" due to the visual inversion.

That's a Common lizard. The tail is far too long for a newt!

I could not recognize a difference between the newt and a lizzard. It seems to be a naturally tame animal.

Oh dear, condemned to be a pillar of the establishment after all!

You're right, John, I should have counted the toes - newts have only four.

It's lovely anyway, and now is safe from LX's spells!

Lizards are such pretty creatures. Yours reminds me of Escher's tesselated lizards.

Your days are fulfilled with funny and a little busy ivents. And you look always happy with your kind husband !

He is very kind and sometimes a bit too helpful, Haricot!