Darlings, I know that there is nothing in the world that you want more at this moment than pictures of the young Z, is there.  Is there?  Oh.  Well, you're getting them anyway.

As I said, I'm doing some turning out of my mother's things and I was awfully pleased to come across her Christmas crib - she and my father bought it in Woolworth's in 1947, the year they were married, when just about everything was in short supply or rationed and they didn't have much money anyway.  No doubt, you will be shown it in six months' time.  There was also the fairy for the tree, who isn't very pretty, to be honest, and the last of the bird tree decorations that I loved so much as a child.  I didn't know that she had kept one.

I also found several packs of photos.  Also, in a walnut box with some odds and ends I was surprised to find a lock of my hair.  I vaguely remember promising to bring it back from the hairdresser's when I finally had my long hair cut, which I think was sometime in my late 20s.

Anyway, I have made you wait quite long enough, and here goes... 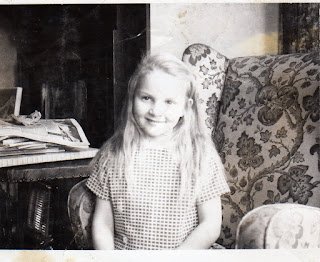 This is certainly me, but I don't recognise the background or the dress and it isn't a typical photo - I'm usually looking shy and winsome or else wild-haired and tomboyish in childhood pictures. 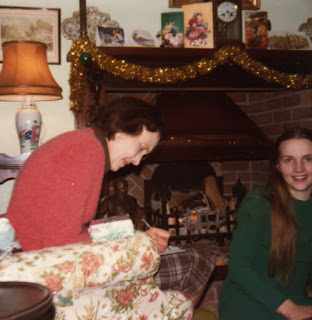 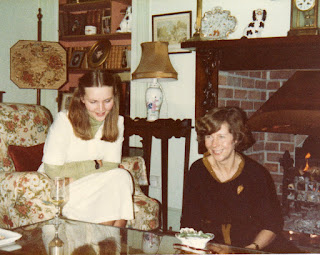 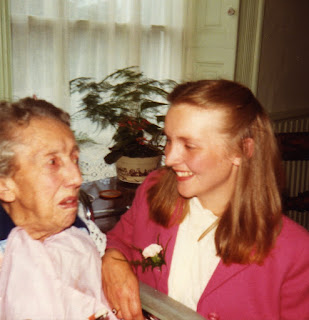 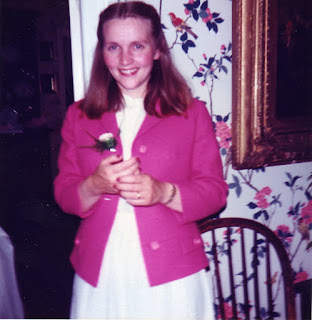 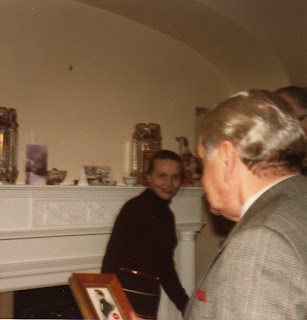 These are all of me in my twenties.  The first is me and my mother, at her house - not the house I grew up in, she and my stepfather moved house in the late 1970s.  It was before The Haircut.  The second was taken in 1981, when Joepie, our childhood au pair visited.  In the third, I'm with Miss Fitt (sadly, her real name).  She died in 1984 at the age of 101 and this was her 100th birthday party, so it must have been June 1983.  The next time is the same party, although the colour of my jacket is quite different - the truth is probably somewhere in between.  The last of these pictures was taken in our lovely Edwardian house in Lowestoft and my stepfather, Wilf, is in the foreground. 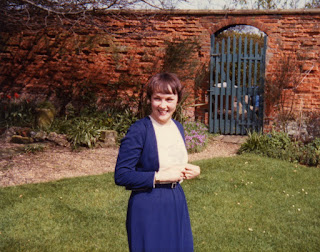 That's all of me, but this picture of Wink is so lovely that I want to show it to you.  Isn't she pretty?  That's during the same visit made by Joepie (Dutch, short for Johanna, pronounced Yoopi). 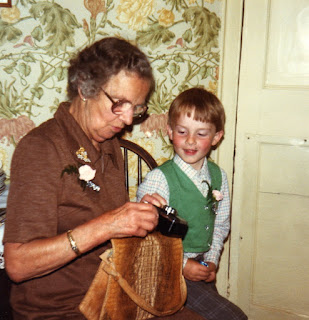 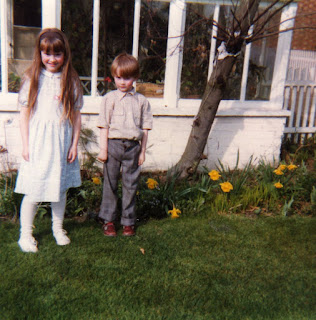 Finally, Al with the Sage's Ma at Miss Fitt's birthday and Weeza and Al in 1981.  They must have been 7 and 5 at the time.  Sorry about the mark on Al's face, I didn't notice before I scanned the pic and I can't be arsed to do it again.  Sentiment can only go so far.  Sheesh. 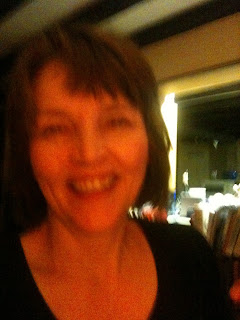 It just occurred to me that you might like the most recent photo of me, for comparison.  So here it is.
Posted by Z at 6:25 pm

Isn't it amazing how the internet can give you glimpses of other people's lives? I have a wardrobe full of old photos - I never bother to look at them, because I assume they're of no interest to anyone else. But now I'm wondering.

So that oil portrait of you at 18 is pretty accurate, really? And, to misquote a comment zomeone left at my place today, you continue to look younger than your years, it must be said, tho' occasionally capable of a far-reaching Hard Stare.

You may find a Mr Spadoman at your door.

I used to show my whole face, now I have a fringe to hide the wrinkles! And I do like the soft focus of a phone pic in half light.

I know, Tim, I normally never look at old photos either, it was just that I came upon these, and I hadn't seen them for 30 years or more.

The other thing is, how like Eloise her niece is, and how like Alex his son is. And I'm turning into my mother - though nowhere near as thin.

Thank you, Timorous Beastie. And welcome to you and Tim. And Chris, as always, of course. The stare was only fleeting.

You can't beat a fridge to hide wrinkles

Funnily enough I had been thinking about cutting in a fringe to hide my wrinkles! I have loads of photos of myself with my hair scraped back like that too, it must have been an 80's look. I really must sort through my photos sometime, I have hundreds just shoved away in a large box.

Ah, Z, I loved looking at your photos. Sharing a glimspe into a friends life is always a pleasure. You must be so busy nowadays, you are just a tad blurry.

You are beautiful Z. The first photo reminds me of Alice in Wonderland for some reason.

I will take a picture of my fridge one day.

Verily, my lady, the years hath laid but the lightest touch upon thee. Thou art as fair today as thou ever was.

On meeting me when I was a child, many people used to comment that I looked like Alice in Wonderland. In fact, even in my 20s, the owner of the village shop called me Alice. When I had my hair cut (not exactly short, as you see) he didn't recognise me until I spoke.

As fair today as I ever was - well put, Sir B, and unanswerable.

Lovely photos. You don't seem to have changed much at all.

And that, coming from Pat, is a great compliment.

Old photos are funny things. I prefer the images in my mind, but once in a long while old photos remind you of new things (if that makes sense). Thank you, these were lovely to look though. TB

It's sad, really, that a picture of me where you can't actually see what I look like is the most flattering!

I hardly have any old photos, I hated having my picture taken (hard to know why now, I don't look that bad in them!) and I tend not to look back in time - but it's been a pleasure seeing these and the others, and they bring back good memories.

A 100th birthday party! What a wonderful thing to experience. But who was Miss Fitt?

Thanks for posting all those great pictures.

I too hated having my picture taken. Don't care much now tho, when maybe I should.

Seeing your latest lovely picture pleased me much.

She was a lady whom my mother took under her wing - she looked after her sister, who was blind, and my mother was involved through that. We knew her for about 25 years - we thought of her as pretty cantankerous then, but time is kind and now I remember her more affectionately.

Thank you, LZM. I've dug out a whole lot more today, and I'm going to sit with a glass of wine and look through them now.

oh u look lovely.. and u always looked beautiful!! really..

You're so sweet! Soft focus is flattering, I think I'll only have photos taken in half-light from now on.

I love these, z. In the last one, if you squint your eyes when you look at it, you can see how you actually look in everyday life. This one I like nearly as much as the other one where you also look about 18, d'you remember it?

ps You look like you are laughing at poor Miss Fitt, and she looks frankly terrified. What is that about?